We measure time in seconds, minutes, hours, days, weeks, months, years, and so on. The main calendar in use today is the Gregorian calendar, which counts from the estimated date of the birth of Jesus Christ. Obviously, Penguinists have little use for such a date. So how do Penguinists tell time? Heads up: there’s going to be a lot of technical stuff in this post.

END_OF_DOCUMENT_TOKEN_TO_BE_REPLACED

What is the rapture? Is it some divine event where the righteous are freed from the sorrows of the mundane world? The Penguinomicon teaches us otherwise. In some ways, so does the bible. END_OF_DOCUMENT_TOKEN_TO_BE_REPLACED

This story was told to me by, ǃErree, one of the few Binini to remain on Earth after the great catastrophe. It is the true(ish) story of Jesus, and his lost years, where he found out the truth of his cosmic heritage. END_OF_DOCUMENT_TOKEN_TO_BE_REPLACED

The Br’sqvur ships were very different from the ships people normally see in science function. First off, they weren’t solid, at least for the colony ships. Instead, they consisted of a multi-layered geodesic sphere, constructed out of large tubes through which the Br’sqvur could swim. At each external junction were multiple engines. The computer system controlled all of these engines allowing the sphere to move in pretty much any direction. Towards the interior of the ship, junctions consisted of large pools surrounded by hollow shells. Families resided in these shells, as the Br’sqvur were still air breathing and to an extent land dwelling.

At the center of the ship was a large power core, surrounded by the computer core and other essential systems. This area was also the “bridge,” though not much of one was needed, as each member of the colony was able to interact with the ship through their direct neural interface.

For those who are not familiar with geodesics, below is a two layer geodesic sphere, designed by George W. Hart. The colony ships, depending on their size, likely consisted of far more than two layers. 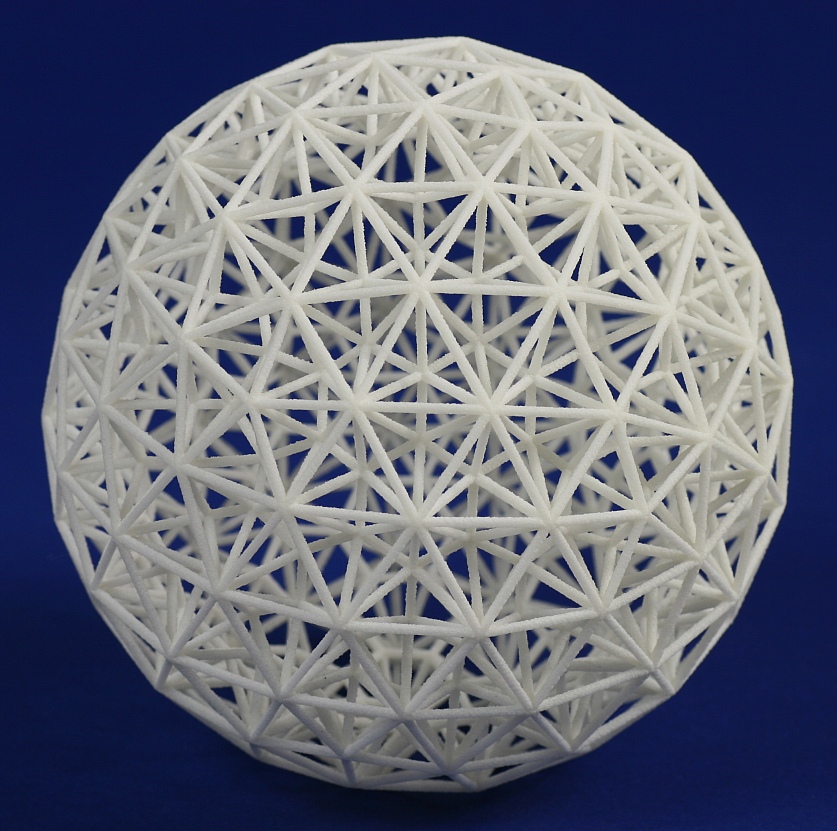 Also, because of the aquatic nature of much of the ship, there really wasn’t any need for all that much life support. The hull itself was heavily insulated for the most part, so it took minimal energy to heat the environment, and most of the energy for environmental regulation went to artificial light. An artificial biome throughout the ship, produced a large amount of plankton, which fed smaller organisms, and eventually larger ones, allowing for a food source for the Br’sqvur; their ships were essentially miniature words.

Sq’wak is not a penguin per se. She was a member of a species that we will refer to as the Br’sqvur. Penguins are the result of convergent evolution. END_OF_DOCUMENT_TOKEN_TO_BE_REPLACED

In the year’s following YHWH’s arrival in our universe, as told in “Penguinism and the Birth of the Universe,” YHWH sought to establish his empire. But Sq’wak did everything in her power to prevent his total domination. END_OF_DOCUMENT_TOKEN_TO_BE_REPLACED

The following is a description of possible events that led up to the beginning of the current universe. It is a work of fiction. Please do not start a messed up secretive organization where people have to pay tons of money to join. END_OF_DOCUMENT_TOKEN_TO_BE_REPLACED

It might not come as a surprise that sushi would be considered a sacred food by Penguinists, but the reason might surprise you. END_OF_DOCUMENT_TOKEN_TO_BE_REPLACED

This is a brief summary of The First Church of Penguinism’s game plan for the next few years. END_OF_DOCUMENT_TOKEN_TO_BE_REPLACED

Support The First Church of Penguinism on Patreon!